The last couple of weeks have been a whirlwind of activity for us both. Kev has been keeping himself busy while I prepare for NESCBWI 18. Check out his latest illuminating animation — It’s a map, and your home is on it!

I’ve been readying my postcards and illustration portfolio for this Friday night’s Portfolio Showcase, in which art directors, editors, and agents, followed by conference attendees, will have a chance to peruse each illustrator’s portfolio.

My big goal over the last two weeks has been to create a new Antarctica-inspired piece. As you may have realized by now, we at Pixel Movers & Makers are both enthralled by polar ice.

I’m particularly interested in the relationship between polar ice and the ecology of the surrounding environment (as well as how that ecology acts upon the ice itself), and primarily, how it affects the success of phytoplankton. Among other things, I’ve been wanting to make a piece that explores the role of icebergs in ocean fertilization.

I decided to make something showing a simplified food chain around the iceberg, with an informational shape poem about the “life” of an iceberg, from the formation of the glacier from which an iceberg calves to its eventual melting out at sea.

Last week, on Pixel Makers and Movers, I showed the early stages of that process. 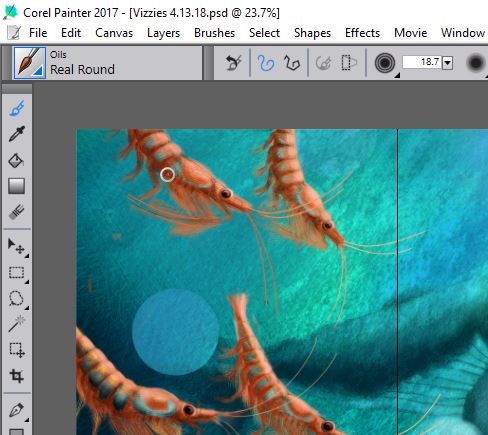 After a detailed pencil drawing of each element, which I scan, I am using digital oil paint.Since then, it’s been a race against the clock to complete the illustration in time for my printer to do their thing. (Shout-out to fantastic Iolabs who patiently put up with my last-minute rush every April; thanks Emma!)

And now for the reveal of the final piece: 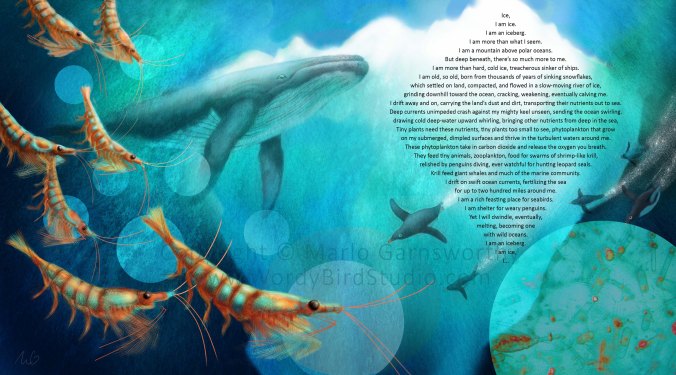 Now, it’s back to making penguins for Kev to swim and waddle–as we continue with our animation about Antarctica’s Pine Island Glacier!

One thought on “Icebergs Fertilize the Ocean–New SciArt”