This week’s science adventure took me to the watery underworld of Long Island Sound with scientists Mike Bradley and Scott Rasmussen as part of a US Fish and Wildlife Service research project. Our goal: to check the extent and health of eelgrass beds along the Connecticut and Long Island shores.

We pound across the Sound on a glorious autumn morning. Terns and gulls wheel and dive, feasting on jumping fish. It’s a perfect day for fishing, and we pass numerous small boats doing just that. Coastal New England, USA, is famous for its bountiful and diverse seafood.

Prior to our adventure, Mike mapped the possible extent of eelgrass by studying dark patches near the shore from areal imagery–photographs taken of calm waters at low tide from a plane early this summer. Seaweed–known by scientists as macroalgae (because seaweed is actually large algae)–can also appear as dark patches. So, using an underwater video camera, we traveled along multiple straight lines–or transects–across each area, and Mike plotted where eelgrass was actually present.

Mike plots eelgrass, while Scott maneuvers the video camera and cheery Tom Halavik, retired from the US Fish & Wildlife Service, drives the boat.

From the boat, eelgrass is a shifting golden-green tapestry beneath, and seaweed looks dark and foreboding. But viewed from below, eelgrass and seaweed beds are a colorful, gently swaying, otherworldly forest. Clams and oysters litter the bottom, spider and green crabs scuttle and hide, and fish such as tautog hunt for prey.

Tautog on the hunt

Mike will return numerous times to Long Island Sound to complete the survey of over 300 eelgrass beds, covering approximately 2,500 acres. The video and mapping data he collects will be used by biologists to monitor the health of eelgrass along this section of New England coastline.

Near the end of our journey, in a quiet aqua-watered cove of Plum Island, we were treated to a delightful encounter with up to twenty seals, who popped their heads up to study us before continuing to fish and play. It was a magical end to my eelgrass science adventure! 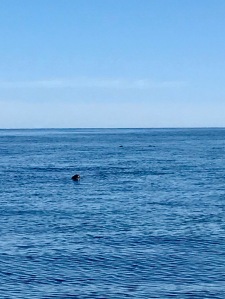 This project is a partnership between the Environmental Data Center of the University of Rhode Island and Suzanne Paton, Senior Biologist at Southern New England’s US Fish and Wildlife Service. The funding for this survey was provided by the EPA Long Island Sound Study, and the information will help evaluate water quality and habitat restoration projects that have been implemented over the years. This data will be compared to data collected in 2002, 2006, 2009, and 2012 by the US Fish & Wildlife Service in collaboration with the EPA to assess long-term trends and progress toward the restoration of this important habitat.

Thanks, Mike Bradley, for taking me along!